It’s that time of the year again when the rackets get busy with tennis balls. Going to Wimbledon is something I’ve wanted to do since I was a teen after watching almost every match, back to back on TV and I’m glad I finally made it there last July after a long wait. 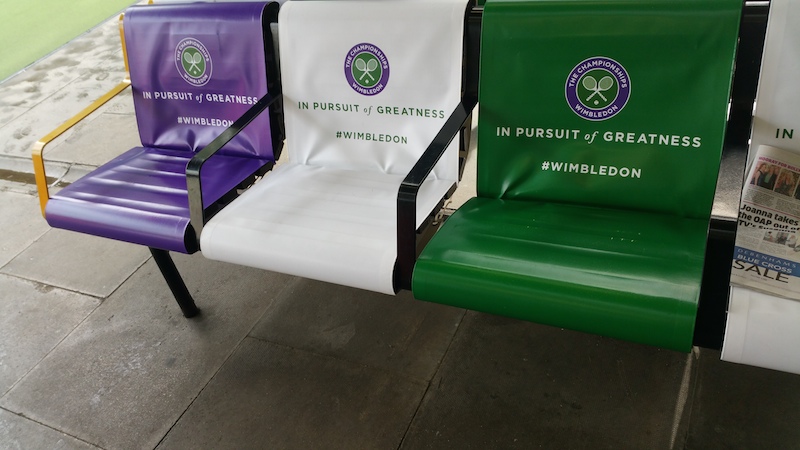 Seats on the platform of Southfields station

Wimbledon is not just the name of a district in southwest London, England but it is also the name of the popular tennis tournament, The Championships, Wimbledon. The district is in the London borough of Merton, which is south of Wandsworth.

The championships take place every year for two weeks on the last week in June to the first week in July. But this year the dates are QUALIFYING: MONDAY 26 JUNE TO THURSDAY 29TH JUNE. THE CHAMPIONSHIPS: MONDAY 3 JULY TO SUNDAY 16TH JULY. 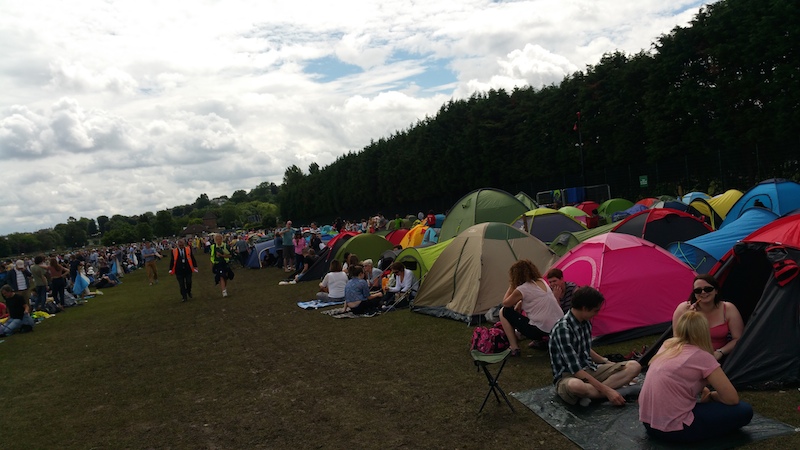 How To Have A Great Day At Wimbledon Tennis Championships. Fans in tents eager to see the tournament.

Wimbledon tickets are extremely popular and hard to get! Purchasing ground tickets was the easiest way for me at the time. They cost me £25 and will allow you to visit most courts except Centre court. Some courts are small and you can easily stand at the back and get a good view of players. 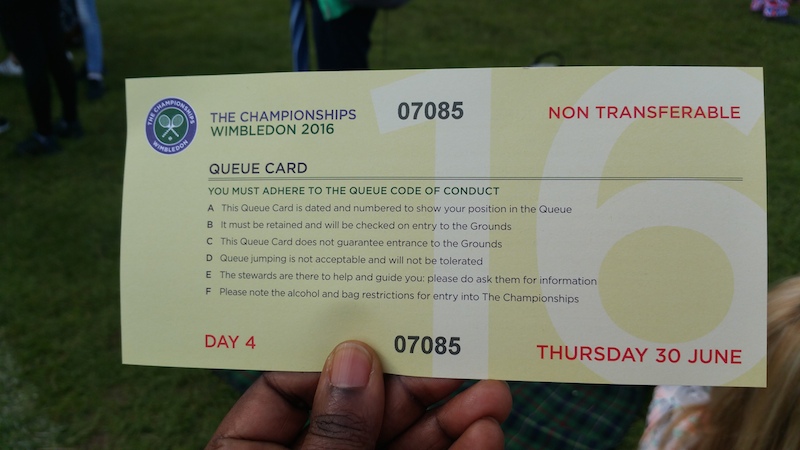 Queuing with my daughter for a couple of ground court tickets at Wimbledon seemed to take forever with the queue moving at a very slow pace. Like everywhere else these day, we were subject to security checks before we were even allowed to access the grounds; which is the norm at some public places. We were issued with a queue card (above) and had to hold on to it because this gave us access to the turnstile where we purchased our tickets to enter the grounds.

We arrived at Wimbledon queueing field a 8:20 am and didn’t get into the grounds until 1:30pm. We queued for 5 hours and 10 minutes on grass but even though it seemed a long time, we turned the wait into a picnic. I remember being asked if food and toilets were available. It was a relief to know that they were within easy reach. 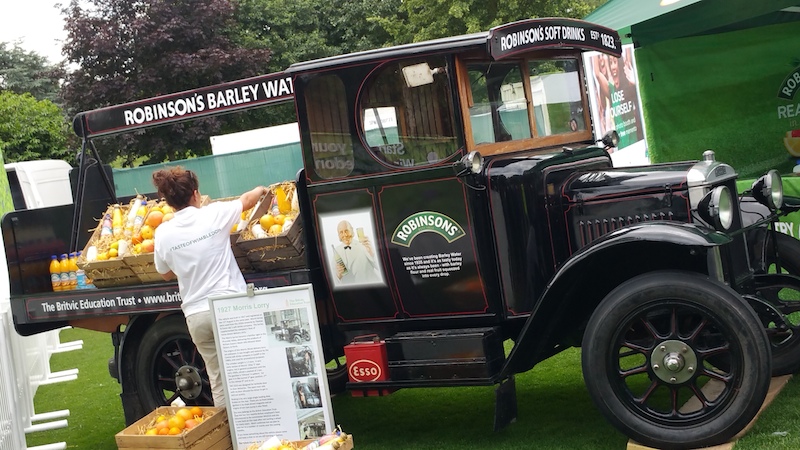 How To Have A Great Day At Wimbledon Tennis Championships. Robinson’s Barley water truck

What to take with you on the day

A Sandwich bar and toilets were available with a friendly atmosphere but the downside was that the meals and drinks were expensive. 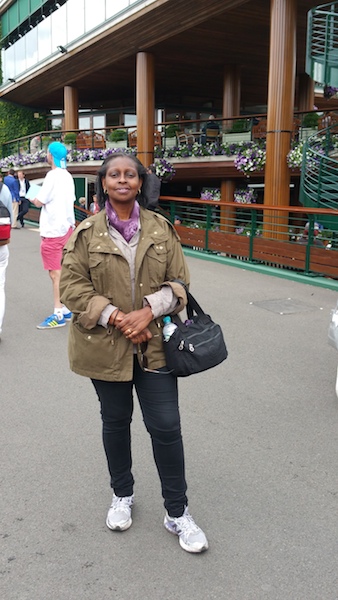 One thing for sure was that almost everyone at Wimbledon had one thing in common; an interest and a passion for Tennis. 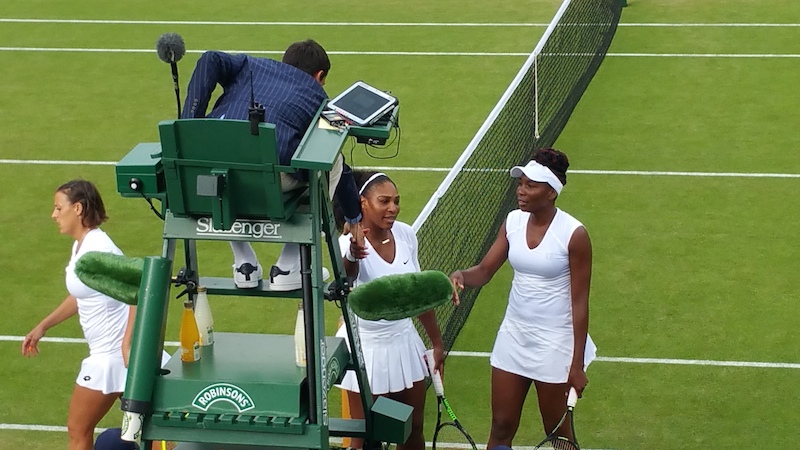 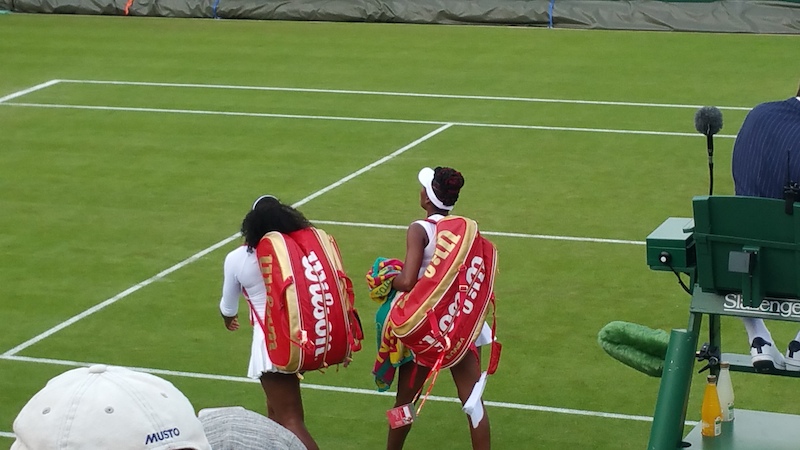 After the sisters won the doubles match

That with a ground pass, once you get out of your seat to quickly go for a toilet break or to buy a drink or refreshments; you won’t be allowed back onto the court without joining the long queue all over again. You will end up joining a long queue for over an hour or more especially if it’s a popular match with the William sisters! 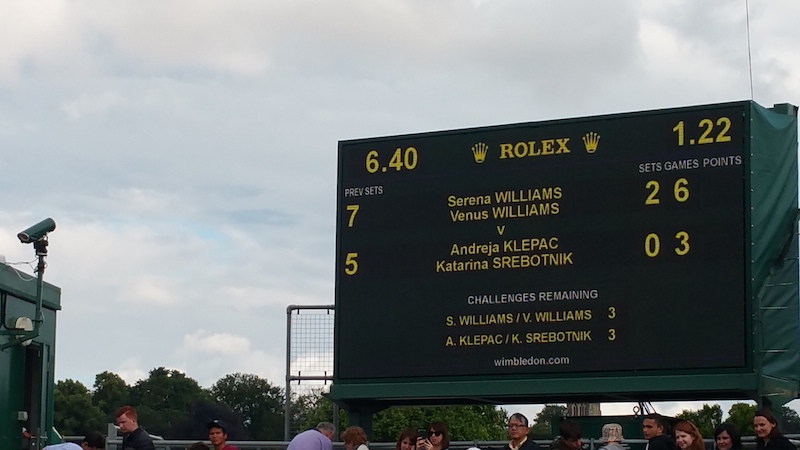 How to have a great day at Wimbledon Tennis Championships

We were on court number 3 when their match was about 1 hour away so we both decided to leave our seats for a short while, thinking we could easily return to them not knowing they’ll be taken. Luckily, we were able to return to the court after over an hour waiting time but we didn’t return to the same seats but at least we saw the sisters up close play a doubles match.

Watching the Williams sisters play doubles was exhilarating. The match started around 4.30 pm and lasted for around 2 hours.

Some useful facts worth remembering

Even though there were a couple of matches in progress well into the evening, it was so hard to break away from the championships. It’s not too late to book your ticket and I strongly recommend you plan a day off work if you can and make a day out of Wimbledon. Oh and don’t forget your sun cream!

A Grand Tour Of The Popular Wimbledon Museum

Everything you need to know about dancing with glasses