When we had an unbearable heat wave in the summer of 2018, which was comparable to the summer we are having now, I thought it would be a great idea to travel within my home country. Personally I didn’t feel that I needed to travel abroad for a holiday, after all we had great weather to contend with in England.

Strangely, I have applied the same philosophy again this year, but this time around I’m having a similar Staycation on home ground because of Covid-19. Discovering Supportive People in Bournemouth was an insight that year. 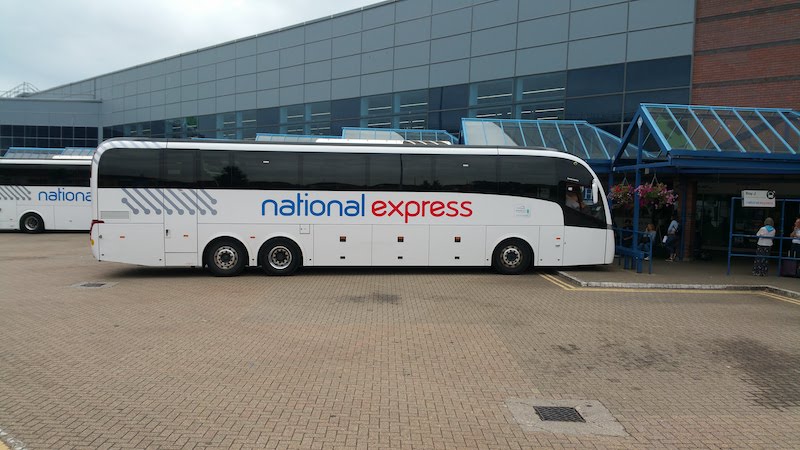 We hopped on the National Express coach from Victoria station in London direct to Bournemouth, picked up some leaflets from the Information office and started to study them whilst travelling to our hotel. We bookmarked the areas we wanted to visit then planned what to do each day. 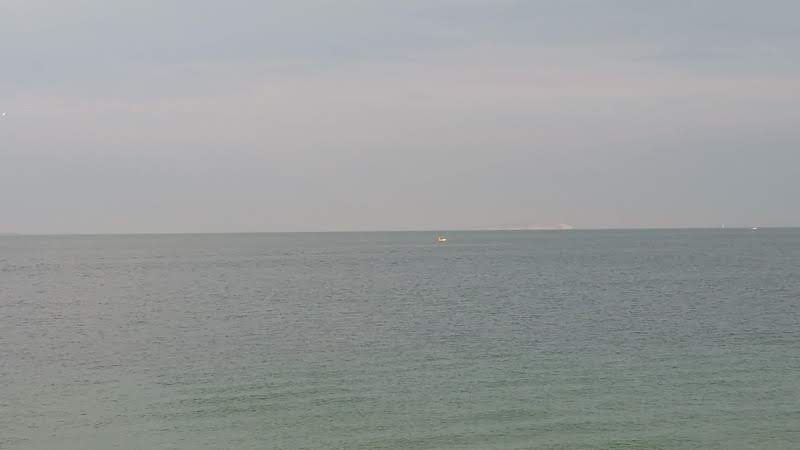 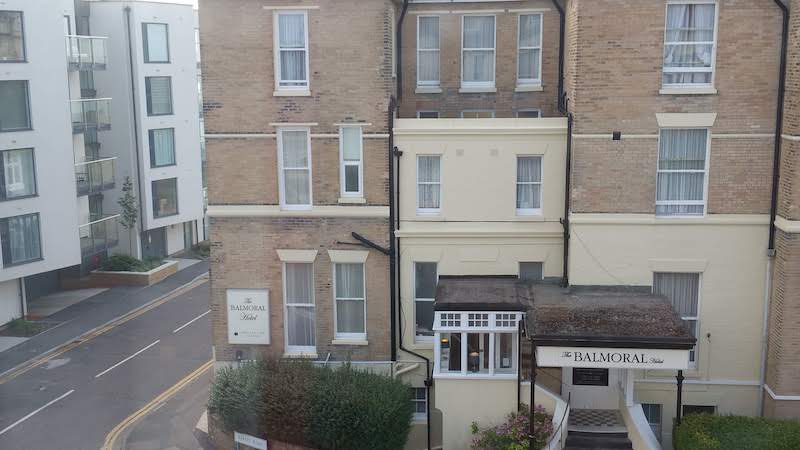 During our short break in Bournemouth, my daughter and I new that we couldn’t leave this stunning town without visiting the Jurassic coast, the world heritage site in the Dorset in the East Devon coast.

After boarding the Purbeck Breezer double decker bus in Bournemouth beach, little did we know that in a short space of time our local bus driver would, drive on to a ferry to cross over to Poole. 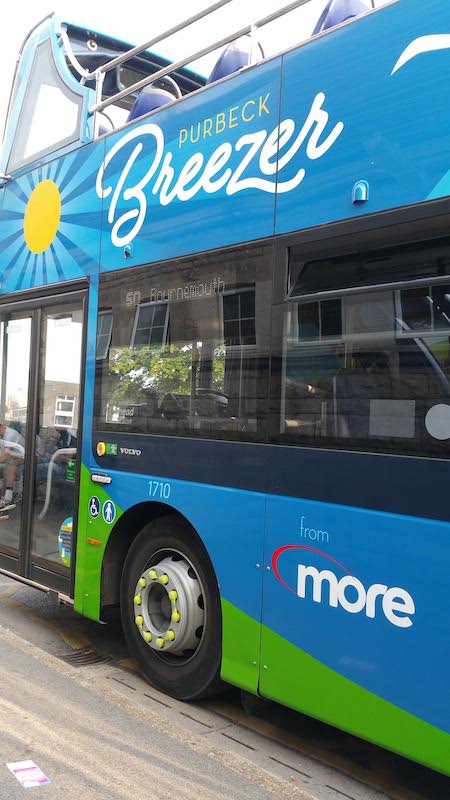 Purbeck Breezer bus that took us to Swanage Pool and Lulworth

We didn’t know that our vehicle will be chained to Sandbanks Ferry. The traffic jam continued in intense heat but we had no idea that the hold up was due to the fact that we were going to be ferried to the other side of town.

So whilst we were waiting for the so-called traffic to subside we felt bolts and were looking around curiously to find out what was happening. We didn’t say much to each other but nearby passengers could tell from the expressions on our faces that we were startled.

This father and son must have seen the expressions on our faces sitting opposite us. The dad explained what was happening. We instantly had a free tour guide who gave us detailed information about this beautiful part of the country and how the sea crossing via ferry worked. 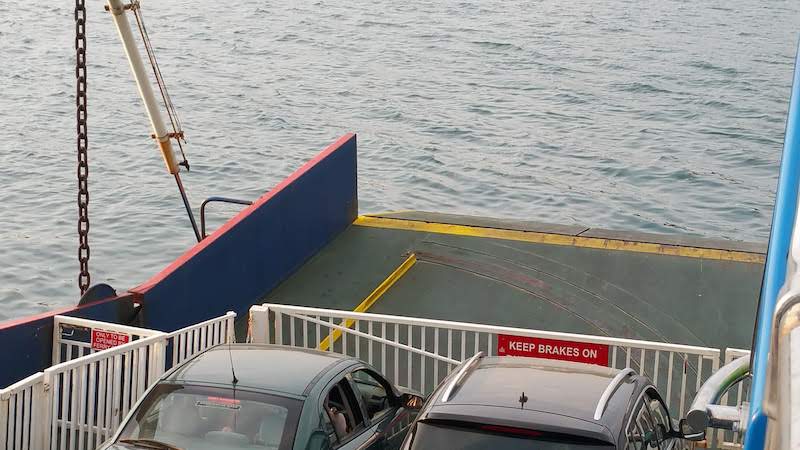 Although our bus is not visible in this photo, It is on the Sandbanks Ferry

The surprising event was unexpected but at least we got 4 trips out of one and paid £8 each for a return ticket from Bournemouth to Swanage then to Poole Harbour then on to Man O War and finally Durdle Doors.

We realised that this journey was the norm for this bus route, hence the reason why the bus driver didn’t announce the transitioning. He probably just assumed we were regulars and this was how it was because locals were all too familiar with the transit. But we were Londoners, tourists in our home country!

We saw passengers scurrying along the ferry and vehicles rushing to board the ferry. With a short crossing, we couldn’t wait to see what was on the other side. 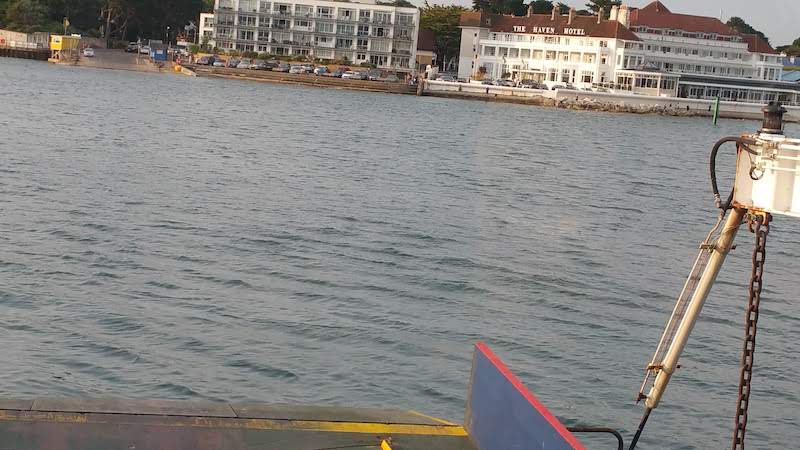 The rear of the ferry as viewed from inside our bus

We stopped at Swanage, a town we had visited a few years back then journeyed past Poole. 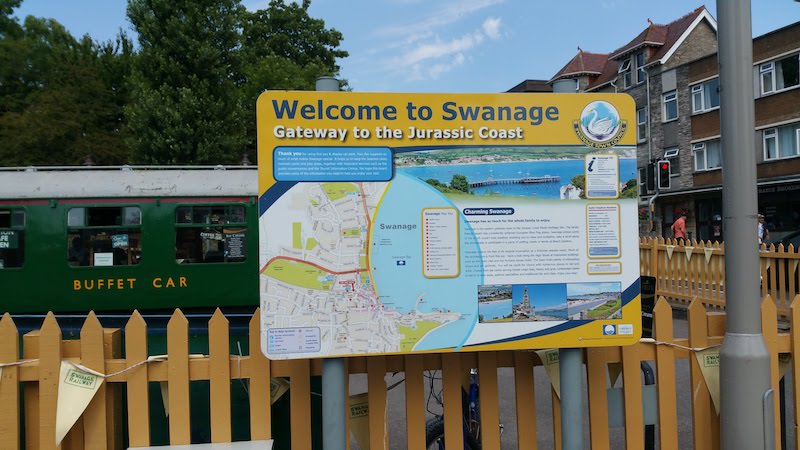 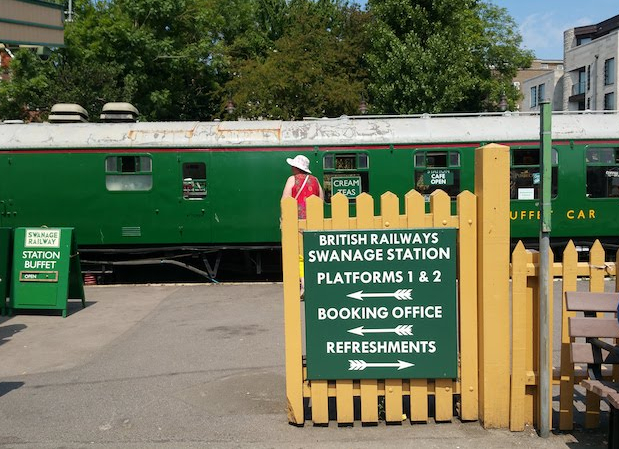 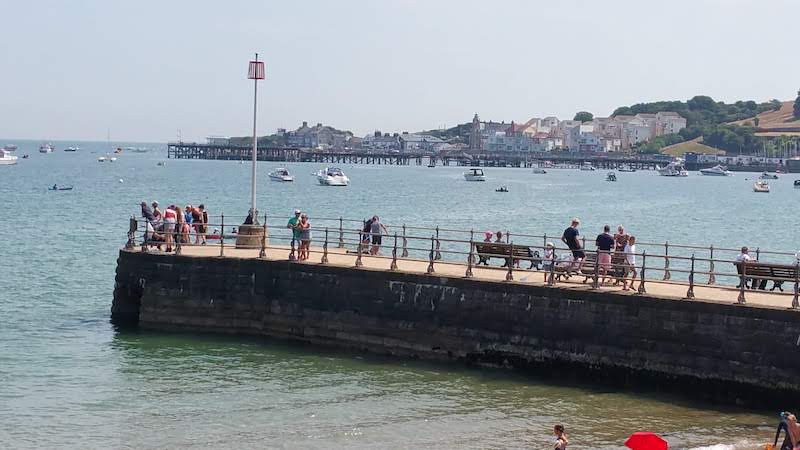 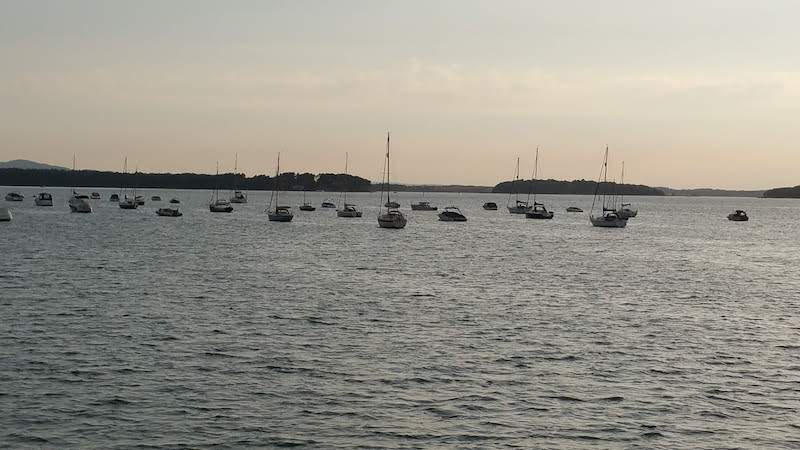 The walk to the beach was more of a hike so I recommend that you carry a hiking stick and wear comfortable walking shoes or hiking shoes because the slopes are steep.

We somehow realised that we were on a hike with other travellers in this stunning hidden spots, which we hadn’t planned. What a gift! 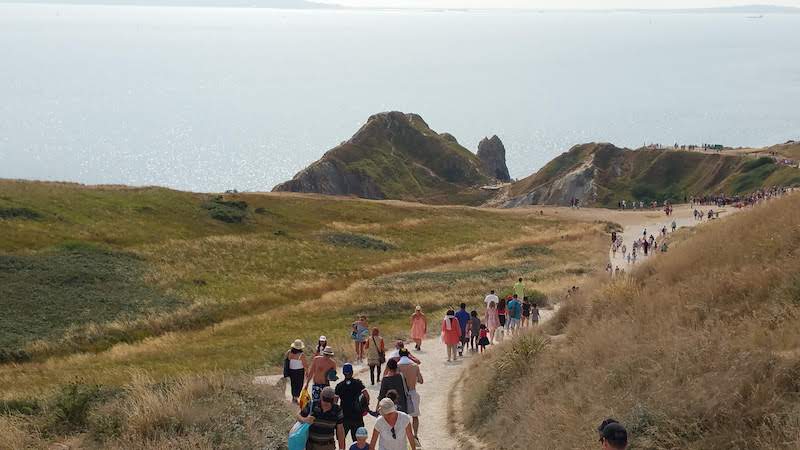 The seawater was crystal clear and the scenery of cliffs is breathtaking. Unlike some beaches, there are steep slopes that will lead you to the beach and there are opportunities to stop, take stock and catch your breath.

Once we got to the top of the cliffs I sat on a rock and reflected on the scenery and wondered why we hadn’t discovered this gem any sooner. My daughter continued down the cliff for a swim. 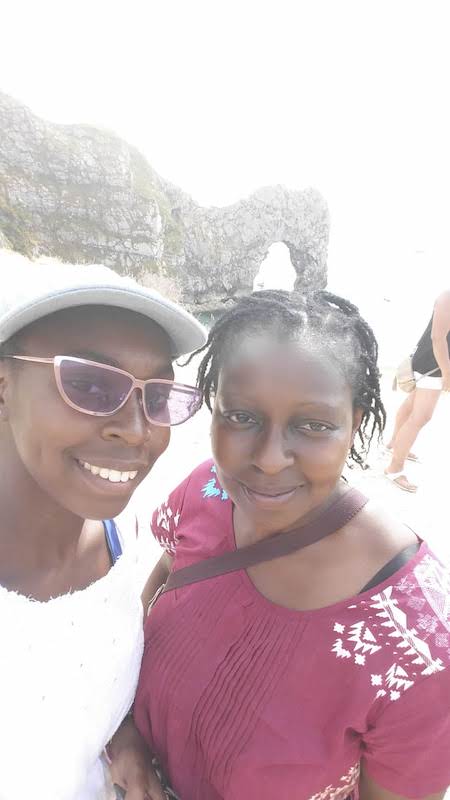 Mother and daughter at Durdle Door 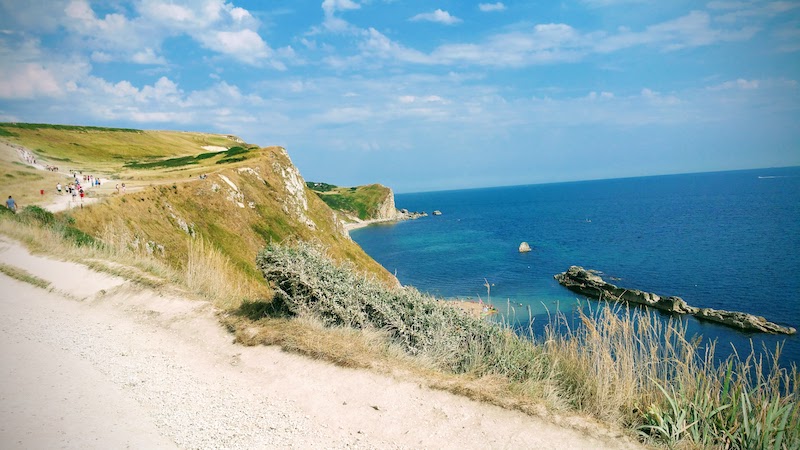 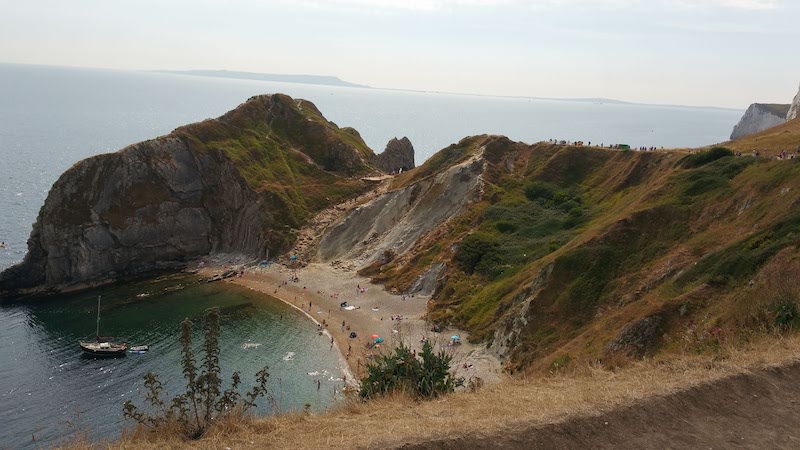 I met a few sunbathers, tourists and locals but one person that stood out of the crowd was a young lady who was in the company of friends. They had been climbing up the cliff for a while but when her party stopped she had the urge to continue climbing and mentioned that this was something she had always wanted to do and must complete it. She eventually achieved her goal!

My takeaway tip is to aim to spend less time in your hotel if you enjoy exploring, hiking and sightseeing. Get familiar with your surroundings but explore beyond your hotel room unless you have a health predicament.

I had learned about Durdle Doors but didn’t realise it was close to Bournemouth. The trip definitely worked in our favour!  My first impression of this eroded rock is that of an animal of some sort drinking from the see.

Returning to our hotel

At the end of our trip in the evening we got the last bus home which was at 7pm, sat comfortably and realised that our supportive tour guides were on the same bus as us, returning to Bournemouth.

We would go back to see the rugged and Jurassic landscape and to explore more areas within the region, with a hiking stick in tow next time around. I strongly recommend going on this adventurous trip in Dorset.

The stunning landscape is not to be missed when you visit the England or if you are in your home country and just fancy visiting somewhere close by.

How we got there:

Would you prefer to travel somewhere in your home country (have a staycation) or travel abroad during a heatwave and Covid-19?  Have you encountered supportive people during your travels? Drop me a line as always.