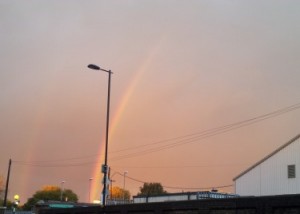 I remember being out and about on this wet afternoon and just as I walked past Selhurst Station; I suddenly became aware of how dark the day had become and so rapidly. There was torrential rain, but then a few minutes later, out of the blue, the sun came out. So the thought that immediately came to my mind was that “I’m pretty certain that a rainbow will appear any minute from now”, but as I gazed in to the sky, it wasn’t just one rainbow that appeared, it was a double rainbow!

First time I’ve ever seen two rainbows lying side by side. I thought, how freaky this was, but unusual it was to see a double rainbow. Seeing a double rainbow is a rarity. Not seen another one like this ever since. I’m now on the lookout a sighting of another double rainbow.