Skip to content
Previous Next
Cruising on The Thames 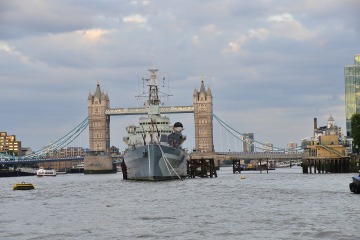 Cruising on the Thames. A view of HMS Belfast with Tower Bridge in the background.

You won’t believe that these stunning pictures were captured while I was partying and cruising on the Thames with friends and family back in August 2013. The cruise took place on The King Edward Cruise Vessel (part of King Cruises) and it was about celebrating a milestone birthday lasting four unforgettable hours.

The cruise was accompanied with scrumptious food, tasty wine and soft drinks. The theme of the cruise was based on the 1980’s, with a 1980’s style disco, music and outfits.

We sailed from Festival Pier at the London Southbank, all the way up to Greenwich Peninsula and then sailed back to London Southbank where cruising on the Thames ended. This is one time I felt I could delay the “passing of time” on that glorious day, because I had such a great time and didn’t want this cruise to end.

The King Edward Cruise Vessel was ideal for the occasion and I could just sense at the start that I was going to really enjoy cruising on the Thames that day because the boat felt quite cosy and the crew were warm and welcoming. It seemed the boat was small on the outside, but once we boarded, I realised how spacious it was allowing adequate room for guests to move around.

Also, the boat had only been recently refurbished which was an added bonus. It has two decks (lower level and Upper level) and two open-air decks. The lower level is home to the Eddies bar, chill out area a disco area and a dedicated area for the DJ who played great music on the night. It had a display of beautiful decorations arranged by the crew.

Catering facilities, food and refreshments were based on the lower level and revellers were quite happy to serve their food and drinks and return to the upper level to soak up the spectacular view. But once the day transformed into night, the disco began and most of us remained on the lower deck to avoid missing out from the 1980’s music. We danced the night away to music like, Michael Jackson, Shalamar and Kool and The Gang and many more…

The Upper level has a vibrant dining area, which leads on to the open-air deck at the front. Most of us wanted to gather here to have a chat and to comment on the amazing landmarks within our reach. These landmarks were within a short-range from each other, for example, The London Eye, Houses of Parliament, St Paul’s Cathedral, Tower Bridge and the Shard building towering over other buildings.

Luckily the weather conditions were favourable and it was a privilege and a great travel experience cruising on the Thames with the King Edward Thames Vessel back in the summer of 2013. Hope to return one day!